skip to main | skip to sidebar

Well, it has been quite some time since a posting here.....OK, so Paul from the Man Cave has a lot to answer for! He has caused me, yet again, to succumb to wanton desires for a minis game I originally had absolutely no intention of getting into! Yes, after just one afternoon playing Dust Warfare with Paul he managed to sneak into the conversations between turns and convince me that the new FFG game Star Wars X-Wing was a "must have"... okay well maybe not so hard to convince as the previews online have been great.

So here we go with the ceremonial unboxing tonight; forgive the pic quality as it was done on an mobile phone :-(

The package being ripped asunder.... 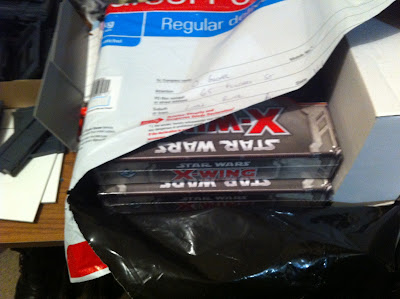 The booty being two Core sets, a Y-Wing fighter and an extra X-Wing Fighter! 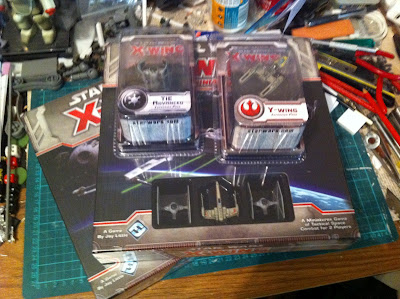 .....inside the box well packed and looking very flash! 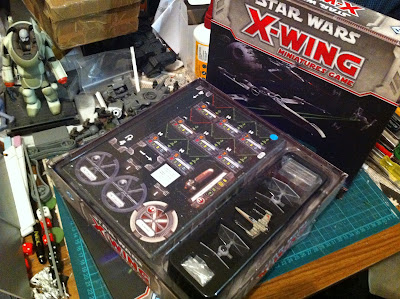 Here are the three fighters from the Core set on their stands. THe X-Wing is a little fragile feeling but they are beautifully modelled. 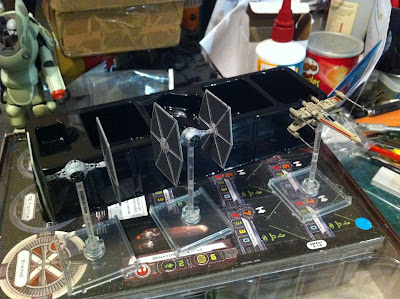 All the extra goodies including dice, rules and cards. 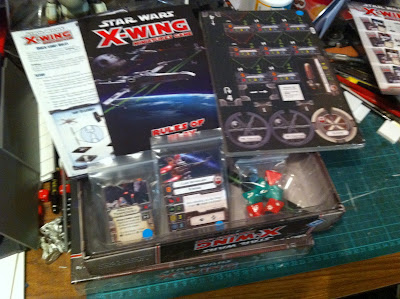 ...... the card stock markers and fighters orders dials yet to be made up. 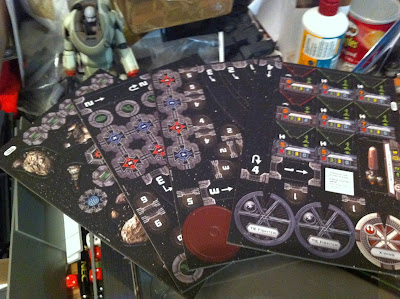 ...and lastly a relative shot of the TIE and X-Wing next to an AT-43 mini for an indication of the minis size. 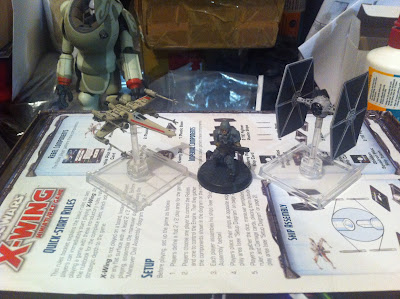 So, over all I think excellent value for a boxed game costing $36AUD! Saturday will be the first game try out at Tom's!

So, any guesses about what this 1:1 scale pice of battlefield terrain might have been from? Found it on a little walk recently...... 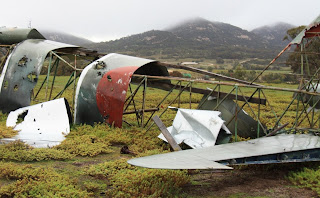 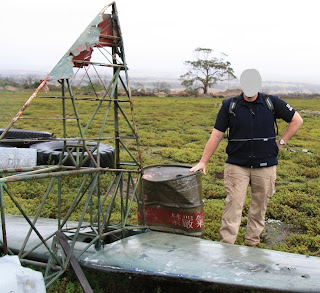 OK, Tas's foray into The Secret's of the Third Reich game "Incursion" has inspired me to work up a Bunker system for US Lucky 7th to clear out. Mind you, thsi will be generic enough to be able to play WW2,Modern skirmsih, Sci-Fi such as Infinity or Halo-esque...or Bug Hunts..... pretty much anything in an underground or warehouse complex setting will do!

I've decided on a 12" square modular system, ultimately enabling a 6' x 4' table arrangement with up to 4 separate entrance sections. 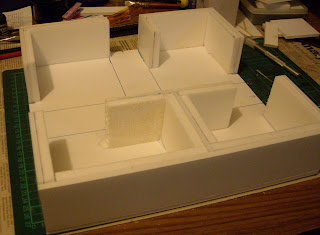 This one is a corner entry arrangement with both 4" wide and a set of rooms on the outside corner. 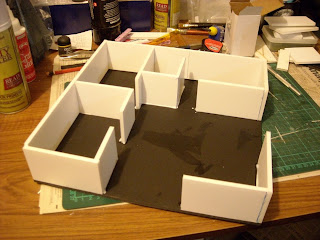 Plenty of thought to put into the clutter that needs to go along walls and inside the rooms....
Posted by Owen at 2:31 AM 3 comments:

OK, this week I received my order of Xeno resin head pieces from Chapterhouse Studios:
...and quickly proceeded to customise one of the Genestealers from the Space Hulk game box.
A fairly basic but quick paint job (4 colors) and this one looks Xeno enough? 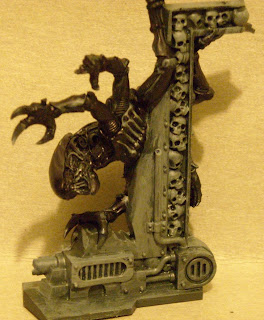 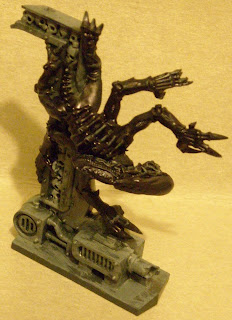 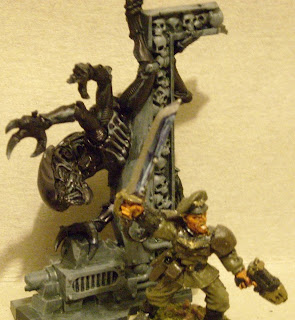 OK, this little bundle of goodies arrived today!!! This is the contents of the "Brutal" game pack that the Master of the Man Cave and I have been hungering after for weeks now!!! Sadly the minis are of such great quality that I fear I shall not be able to do them justice with a paint job!!!! 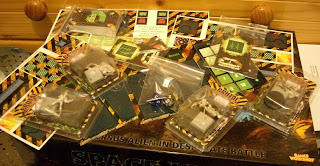 Some works in progress for generic Urban Terrain... better suited to Stalingrad, Berlin 45, WW1 Somme Villers Bretonneoux and any Sci-Fi where it represents an urban scape that has been bitterly fought over.... 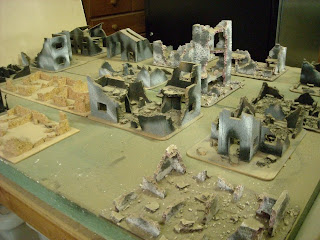 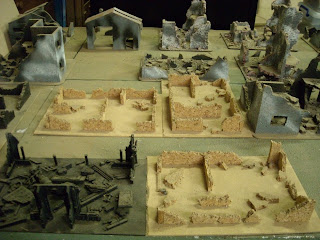 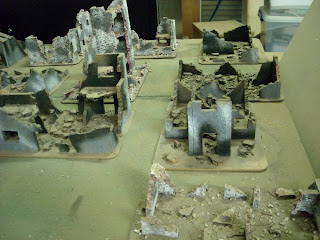 OK, so after swearing not to succumb to "yet another new Codex release" buying frenzy I promptly went out and got the new Space Wolves Codex... and of course the most unlikely of unit choices catches the eye... Thunderwolves.. well, whoever heard of anyone EVER riding a wolf? Actually, this is a game so it doesn't really matter!! In any case I went back out and got the Canis Wolfborn mini which really is a beast of a miniature... for teh hermits out there, he is on the left on the pic below.

So, in typical Games Workshop form, they haven't released a mini for the most dramatic of all the Space Wolves army list... so the web forums are full of suggestions of all sorts. For my part I came across the Dungeons and Dragons singles minis of the Dire Wolf and after a very little effort of rearranging a set of Space Marine biker legs the result is what you see below. Personally I'm quite happy with it. Good size match and the soft plastic is ok to work with; just using SuperGlue instead of Revells. See how it comes up painted. 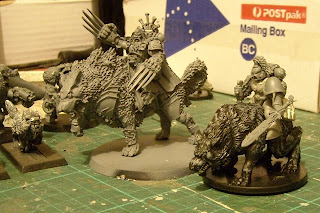 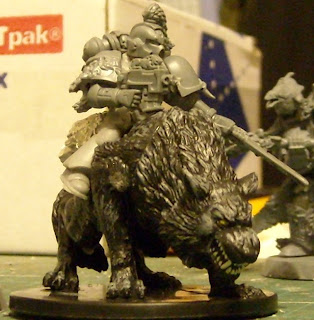 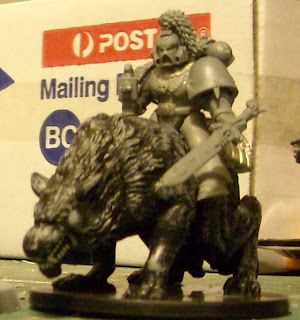 Owen
After nearly 20 years as a soldier, I hung my boots and now I drive a desk as a Public Servant! So, although I don't have dig in or build field defences I can put all those skills to work in the garden for my wife on weekends!? I think the soldiering was easier; at least I got field allowance then!